Chicago was fortunate to have TWO 24-hour Horrorthons this year. This was the first one.

The (Annual) 24-hour horror movie marathon at the Music Box Theatre in Chicago was held on October 13 - 14. Formerly known as the Music Box Massacre, now called Music Box of Horrors. Kicked off Saturday at noon, here was the line-up of films (in order), all of which were presented in 35mm except the newer films, Satan’s Little Helper and Eddie: The Sleepwalking Cannibal both DCP. The Golem was 16mm. Special guests included Sybil Danning and Jeff Lieberman. Roughly 600 people attended the event over the 24-hour period (around 150 were there at the end). 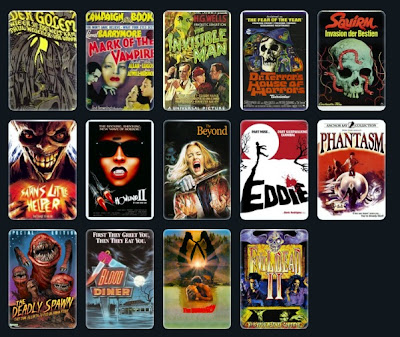 I arrived right before The Golem kicked off the event. I stayed (awake) for 10 films leaving around 6:30am after The Phantasm. I would have loved to stay but I needed s little sleep before the "Day of Chicago Firsts" event at Portage Theater in the afternoon. I really wanted to see Deadly Spawn and Blood Diner on the big screen. Ah well. Still managed 18 hours of film.

Best moment: meeting Sybil Danning and chatting for a bit around the midnight hour. She is an awesome person.

WTF moment: during Q&A, audience member asked Jeff Lieberman what he thought about the demise of 35mm film, expecting him to provide his lament. Instead he said, "fuck film. I love digital. I'm not looking back." (paraphrasing)