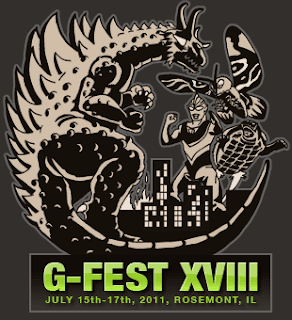 The annual G-Fest Convention kicked off today with a couple of double features at the Pickwick Theater. Couldn't attend the daytime screenings due to work but wasn't going to miss the nighttime programming that featured a couple of movies I've already seen but relish viewing with a captive audience of Kaiju fans.

First up was Godzilla vs. Mechagodzilla (1993), a movie I watched during a movie night at Ron's a few years ago. Wasn't crazy about it then but enjoyed it considerably more on this evening. Still has a silly final battle sequence and I just hate that made Godzilla evil in the 90s. 6.5 / 10

The second feature was another movie I may have first viewed at a movie night at Ron's Gamera: Guardian of the Universe (1995). This really could have been called Gamera Reborn because this is the first film in the trilogy of modern Gamera flicks, much darker films with the awesome flying turtle. Great to see on the big screen even if it was projected from DVD. 7.4 / 10

Email ThisBlogThis!Share to TwitterShare to FacebookShare to Pinterest
Labels: 1993, 1995, Gfest