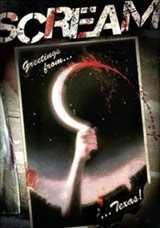 In revisiting the Scream series I discovered the older horror film Scream (1981), which I hadn't seen. So I ordered from Netflix and proceeded to watch. Whoa, this is not a good film at all. A group of people go on rafting trip to a ghost town, get stranded there then begin to get killed off. All the characters do inexplicable things and ending reveal is just bad. I think I listened to part of the commentary because I was so dumbfounded by this movie. 5 / 10

Followed that with third film in Craven's franchise, Scream 3 (2000), which despite owning the DVD for at least 10 years I have never seen. Until now. And now I feel foolish for waiting for so long because I really dig this installment (more than the second film). Maybe it's Parker Posey that does it for me but it just works on a different level. 6.5 / 10

Email ThisBlogThis!Share to TwitterShare to FacebookShare to Pinterest
Labels: 1981, 2000