The Cyclops (1957) ran on TCM's Drive-In B-movie night. It's another Bert Gordon flick that is essentially an alternate take on his Amazing Colossal Man, kinda like a prequel in a way but with a different origin (both films came out in the same year). I'm a fan of this and Lon Chaney Jr. 6.6 / 10 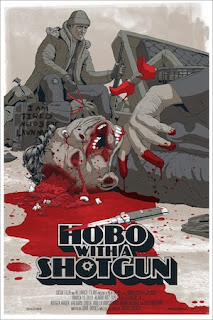 Please Don't Eat the Babies (1983) a.k.a Island Fury is a fairly weaksauce cannibal slash hostage tale that has few merits but not enough to make it memorable. 5.6 / 10

Dropped into the theater for a non-3D screening of Green Lantern (2011). Disappointment is about all I can say. I didn't think the effects were that bad but it's the story that really brings it down. That and Blake Lively. Not one I care to revisit. Maybe someday but not soon. 6 / 10

Was able to rinse my eyes later at the Music Box for a midnight screening of Hobo with a Shotgun (2011) with a few of my Chicago friends. It's as if I didn't see any other movies on this day because Hobo is so fucking good. If it's possible to fall in love with a movie in its opening minutes, this would qualify. Cannot express my passion for what Jason Eisener was able to accomplish with his love letter to 80s exploitation cinema. Look forward to many viewings of this in my future. Thank you, Rutger Hauer and Mr. Eisener. 9 / 10

Email ThisBlogThis!Share to TwitterShare to FacebookShare to Pinterest
Labels: 1957, 1983, 2011