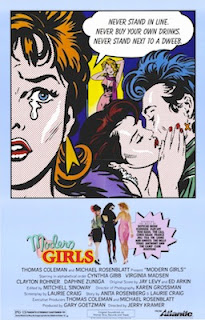 Since the Projection Booth recently interviewed Dolph Lundgren and covered his seminal film Red Scorpion (1989) directed by Joe Zito. Figured it was time to give my VHS a spin. It's a little long in the tooth but great nevertheless as his character transforms. Cool to watch this then immediately listen to Mike and Justin discuss it on their podcast. Check it out here: Episode Five: Red Scorpion. 6.5 / 10

Stuart Cooper's Overlord (1975) was expiring on NWI so time to watch. Mesmerizing film following this young soldier as he prepares to join the army and go to war for D-Day. Poignant and recommended viewing. 7.7 / 10

Modern Girls (1986) calls back to nostalgic interest of mid-eighties Los Angeles (think Less Than Zero). This is pure light comedy that is one of those "it happens all in one crazy night" flicks. Three girls (including hottie Virginia Madsen and Daphne Zuniga) head out for a night on the town with their bestie Clifford and antics ensue. Fun watch. 6.7 / 10