Because I wanted to catch Catfish (2010) before it left the theater I went out to S.Barrington AMC for a matinee, eschewing the late NFL game. I think it's just as what many that I know have said, insidious. I don't buy it as a documentary or that the narrative happened naturally. All that said, it is a very compelling watch and I would encourage anyone with a Facebook account to watch it. 7.4/10 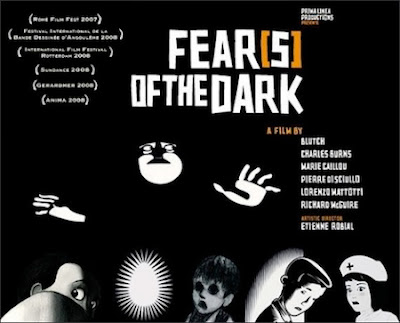 Finished watching the late game and capped the evening with Peur(s) du noir (2007), a series of animated short stories with a horror element. This played at Fantastic Fest a few years ago and I'd heard some good things. Unfortunately it didn't live up to what I was expecting. Still a okay watch but definitely didn't pass the movie night mustard. 6.7/10

Email ThisBlogThis!Share to TwitterShare to FacebookShare to Pinterest
Labels: 2007, 2010, catfish, fears of the dark