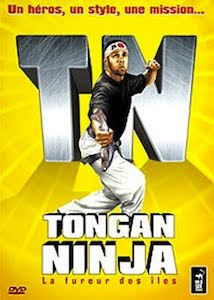 Monday and back to the confines of my home after a whirlwind weekend in Austin. Decided to give Tongan Ninja (2002) a go because it just looks ridiculous. And it is. It takes a basic 80s ninja trope and pokes fun. The premise is two disagreeable brothers grow up on an island trained in the art of the ninja (not really ninjitsu here, folks). The good brother leaves the island and gets caught up defending a girl and her restaurant from a mob boss. The mob boss hires the bad brother to fight the good brother. Enjoyed the build up more more than the final arc. Dig Jemaine Clement. 6.2/10

Next was David Huey's Capital Punishment (1991) a.k.a. Kickbox Terminator, that was recently covered on GGTMC. Gary Daniels is the fighting star here and most of this flick is a head-scratcher. Still not sure what exactly was going on or what the point of all it was. Clearly not a good film as well even with David Carradine. 4/10

Email ThisBlogThis!Share to TwitterShare to FacebookShare to Pinterest
Labels: 1991, 2002