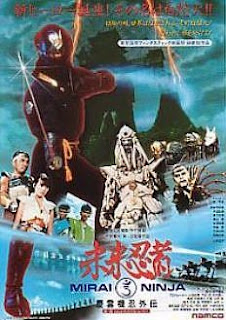 This flick Mirai Ninja (1988) a.k.a. Cyber Ninja looks as if it could've been made in the last 10 years. But instead it's over 20 years old and it's fucking excellent. Still can't get over how awesome it looks; its weird period genre mashup is so Japanese. I don't want to spoil anything but let's just say there's a super ninja and a whole lot of robot ninja and a clan that must save their princess from an evil villain. The character designs are really great too. Thinking I may need to screen this at Ron's home with his kids, who should love this flick. 6.7/10

Posted by sleestakk at 9:17 PM

Email ThisBlogThis!Share to TwitterShare to FacebookShare to Pinterest
Labels: 1988