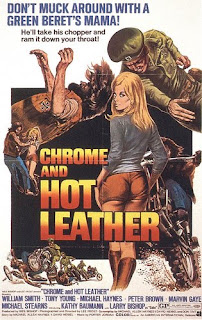 Decided on a couple of NWI flicks tonight to wind down from another long office. Can't wait for my holiday time-off to begin! First up Chrome and Hot Leather (1971), a biker revenge flick. I think the premise of the Vietnam vets infiltrating the biker community to enact revenge is a good one the the execution could've been better. 6/10

Next was a seriously inexplicable English language remake of Hideo Nakata film by Fruit Chan, Don't Look Up (2009). I saw the original 10 years ago and really enjoyed it. This film… well, let's just say that it was unnecessary. Surprised that Eli Roth has a small part in the set-up scene. Watchable but barely. 5/10

Email ThisBlogThis!Share to TwitterShare to FacebookShare to Pinterest
Labels: 1971, 2009