Picked off Gor (1987) on NWI because it's the type of film that plays well to me. Action adventure fantasy sci-fi flick based on a series of novels by John Norman. Plus it has both Jack Palance and Oliver Reed hamming it up. Basically a timid professor gets transported to the planet Gor and gets caught up in saving an oppressed country from its ruthless king. He returns back to Earth all confident. Stupid but fun for me. 6/10

Also on Instant Watch: Santa Claus (1959), the weird René Cardona Mexican flick often considered one of the worst films of all time (bottom #53 at imdb). That said I can't see why as it's genuinely a bizarre number but very watchable because of that. 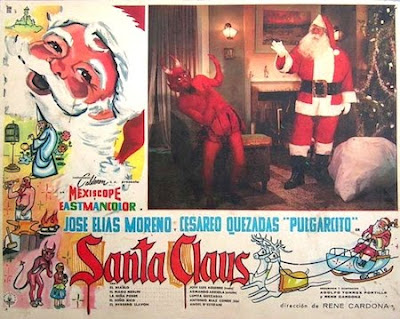 No, it's not a great film but in context this is delightfully entertaining as Santa with the assistance of Merlin must defeat the Devil in order to save Christmas. Quite an oddity worth seeking out. 6/10

Email ThisBlogThis!Share to TwitterShare to FacebookShare to Pinterest
Labels: 1959, 1987