Thanks to Netflix Watch Instantly I was able to view yet another Reg Park Hercules flick in Hercules and the Captive Women (1961). You'd think with a title like that and Fay Spain as the Queen of Atlantis the film would be at least a little provocative. No, not really. Isn't all that bad but hardly the best of Reg Park films. I may have seen this one before because the creepy blonde clones are familiar but it's a blur. Do really admire the crazy set pieces... seriously, the underground chariot the race is amazing. 5.5/10

Went to Muvico for the midnight screening for Alexandre Aja's Piranha 3D (2010)!! Was a little worried w/the packed crowd of younger-than-me peoples but they settled down and really got into it. Fun film to see on the big screen w/a good crowd but damn do I ever hate 3D. Even the few gimmicks really didn't work. But as a throwback film, it's a damn load of fun. Look forward to the eventual movie night screening in 2D. 7/10 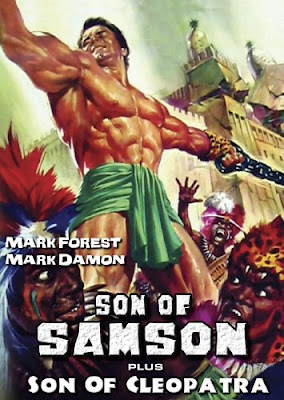 Venturing into another Italian swords & sandals flick on Instant Watch, Son of Samson (1960) doesn't play quite as well as the Hercules films from the same period but again I admire the set pieces and the scale. And at least the women are very attractive! Plus the poster art for these films is terrific! 5/10