Caught a late afternoon screening of Stallone's The Expendables (2010) and enjoyed it immensely. It delivers what it promises including some clunky dialogue exchanges and great action sequences. I was grinning ear to ear during the last 20 minutes. Looking forward to Stallone's master edit. 7.1/10 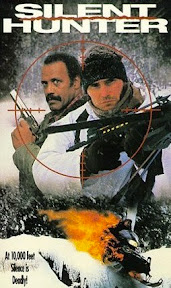 Another bad film on the Never Say Die DVD flipper, Silent Hunter (1995), was directed by Fred Williamson! Of course he also has a small role but it's kinda amusing that one of the sets is his auto dealership (the office is adorned with his framed movie posters and various memorabilia). Didn't enjoy this crime/revenge story very much but whatever. It happened. 4.4/10

Thanks to NWI I revisited another wish fulfillment flick of my teenage years in Private Lessons (1981) starring the ever so sexy Sylvia Kristel as the maid who seduces the rich kid in a scam conceived by Howard Hesseman's butler character. Yeah, this isn't a great film by any stretch but damn if it didn't stir up some feelings back in the day. Almost wonder if they could make a mainstream film like this again. 6/10