Terror in the Aisles 6

Big movie day that started with a early matinee of Scott Pilgrim vs. the World (2010). Really adore the hell outta this film. It's not perfect but hot fuzz is Edgar Wright a master craftsman. Yeah, I'm burnt out on Michael Cera being... er, Michael Cera. But it's all the other characters in this film that rock it. And Mary Elizabeth Winstead has that certain something. Look forward to repeat viewings. 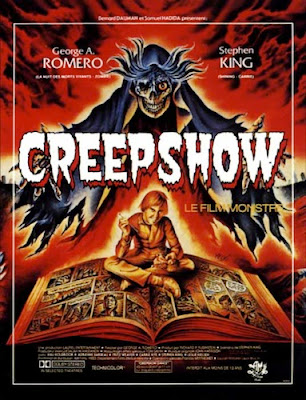 Evening was all Terror in the Aisles & 35mm prints at Portage Theater. Things kicked off with Creepshow

(1982). So great to see that projected. Have fond memories of watching w/my little brother when we lived in Rockford and certain segments scaring the shit out of him. oh yeah, the kid w/the comic has the best toys evar seen in a film! Godzilla *and* Rodan Shogun Warriors? Talk about rare vintage toys! Want 'em both!

(2009). Not a great film but made more entertaining seeing it w/this crowd. Mostly slow but decent pay-off.

Last up was Tales from the Darkside: The Movie

(1990). Really great to see this again as I had forgotten a lot it. Solid anthology and love, love, love Debbie Harry. Film is loaded with awesome actors! Another fine event by Dark Chicago / Chicago Horror!