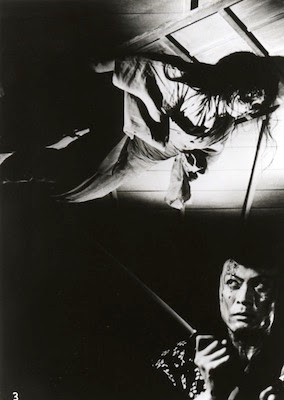 The Ghost of Yotsuya (1959) was featured on @TCMUnderground as part of a Nobuo Nakagawa double feature with Jigoku. As a big fan of his Okatsu films was glad to have caught this. Tôkaidô Yotsuya kaidan follows the tale of a ronin that murders the father of a woman he wants to marry. They eventually marry but he becomes unhappy of his boring life and decides to commit the most heinous of acts. The result is a horrifying display of ghost terror that is remarkable given the year this was made. Really great watch. 7/10

Tales of the Gold Monkey (1982), the TV series, received some mild excitement when the DVD set was announced. I had never seen it but it sounded like something I'd really love, a 30s-era pulp adventure serial. Gave the initial pilot movie a go, which was later broken into the first 2 television episodes, and it's generally entertaining although not nearly as great or campy as I wanted it to be. Stephen Collins is very likable as Cutter and Caitlin O'Heaney is decent for the sexual tension but the other characters didn't work for me. Story of seeking the gold monkey on an island of vicious human-like apes is also just okay. Lots of stock footage too. I watched the subsequent episodes when Roddy McDowall was added to the cast but don't expect to continue. I'd say only the original 90 minute film is worth watching. 6.5/10

Cape Fear (1962) is unsettling and the very reason why I've held off watching for so long. Mitchum is menacing as Max Cady as he stalks a lawyer's family as retribution for being put in the can for 8 years by the lawyer, portrayed fiercely by Gregory Peck. Edge of your seat material. Savalas shines in a bit role. Fulfills my blindspot goal but also may give me a nightmare. Really admire Mitchum for taking on roles such as this. 8/10

Email ThisBlogThis!Share to TwitterShare to FacebookShare to Pinterest
Labels: 1959, 1962, 1982

I am glad that I watched this movie. This movie is a classic flick. I am really impressed with the script writing and direction of the movie. The story is very interesting and I am sure you like it.Thanks for the reviewing this movie.

which one, Ghost of Yotsuya or Cape Fear? Both are excellent.