The Angry Red Planet (1959) was on NWI and one I had to see with my proclivity towards 50s Sci-fi. Basically we (almost) have the origin story of the Fantastic Four as four scientists get trapped in space after finding their way to Mars. On Mars they encounter hostile aliens including a giant bat spider. The red filter is hilarious but it works. 6/10

L'illusionniste (2010) a.k.a. The Illusionist is Chomet's love letter to Tati. Brilliant animation of a somber tale of a wondering magician in Old Europe. Very heartfelt and sad yet beautiful. 7.2/10 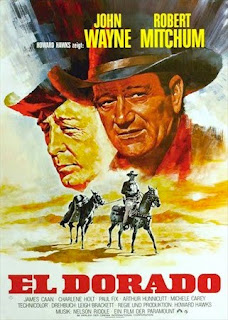 Caught of little of the Howard Hawks western El Dorado (1966) on a cable station the other day and immediately knew this was something I had to see from the beginning. Library delivered the DVD and I dug into this film featuring macho men and über-attractive women. Robert Mitchum (again, unintentional tribute month) is the drunkard sheriff while John Wayne and his sidekick James Caan are hired guns. They capture outlaw boss Ed Asner and face-off with Christopher George and his gang. Both Michele Carey and Charlene Holt are stunning in support roles. See this movie! 8/10

Email ThisBlogThis!Share to TwitterShare to FacebookShare to Pinterest
Labels: 1959, 1966, 2010

I like the story of the movie.Although performances can be better as script demands but still one time watch movie.Very well implemented Sci-Fi effects.Go and watch the movie.