Eddie's Got a Twisted Brain 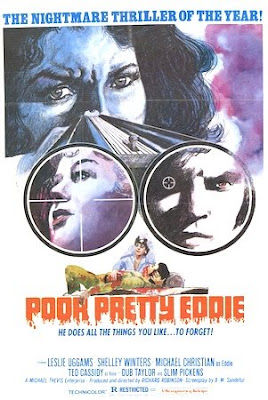 The Motel (2005) is a slice of life about a young Korean boy who observes the daily going-ons at his parents' seedy motel (it's the kind of place that visitors rent by the hour). It's an interesting film directed by Michael Kang featuring a mostly Asian cast including Sung Kang. I'd say it's a coming of age film but not much really transpires by the end. Still a decent watch and nice character moments. 6.8/10

Poor Pretty Eddie (1975) was mentioned recently on Twitter when @BradFHenderson said he was watching it (and enjoyed it). I bumped it up in my queue even tho there's a high resolution print due for release (the available DVD is a poor VHS transfer). Excited to see this it only took the opening sequence when Liz (Leslie Uggams) arrives at Eddie's bar for me to realize that I've see this before many years ago. Some parts I had forgotten but definitely didn't forget Shelley Winters as the sociopathic Bertha or the totally bonkers batshit finale. 6.6/10

Email ThisBlogThis!Share to TwitterShare to FacebookShare to Pinterest
Labels: 1975, 2005