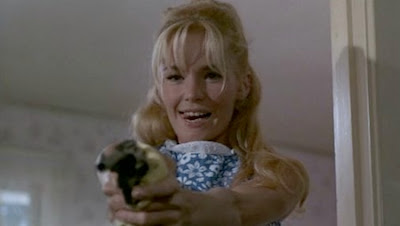 Noel Black's Pretty Poison (1968) was mentioned by @bobfreelander on one of his guest posts (@TLBugg was the guest writer) and @VHSistheTruth also commented on it. That was enough for me to seek it out and give it a spin. Damn, this is a good flick. Anthony Perkins is very good conning the younger, super attractive Tuesday Weld into his scheme. But she is fantastic as a manipulative junior black widow. Solid. 7/10

Killing a little time during pre-game, I selected Godzilla vs. The Thing (1964), the westernized Mothra vs. Godzilla on NWI. Not sure if I've seen this version of the film but it's very adequate and still conveys the story just as well. I love Mothra so I'm already predisposed to enjoy this film even in this version. Godzilla looks great and love the baby caterpillar twins taking on the Big Green. Akira Takarada still owns even dubbed. 7/10

After the games I closed the evening with Walter Hill's Undisputed (2002), featuring Wesley Snipes and Ving Rhames in an all-out prison boxing match. Not a particularly great film as the motivation of the Iceman didn't work for me but as a film it looks very good. However, it doesn't feel so much like a Walter Hill movie. 6.2/10

Email ThisBlogThis!Share to TwitterShare to FacebookShare to Pinterest
Labels: 1964, 1968, 2002