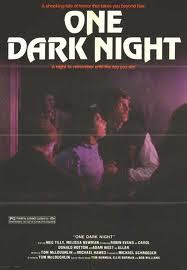 One Dark Night (1983) isn't nearly the scary movie that it could've been. And quite frankly the most disturbing scene is in the opening the sequence when a pile a bodies is found in a closet. The basic premise is that a girl who wants to join a clique of snobby girls called "The Sisters" and is forced to stay in a mausoleum overnight where a serial killer has been recently interred. By some unexplained reasons the serial killer has the power of telekinesis and returns to the sorta-living; he uses his powers to "raise the dead" against all those now trapped in the mausoleum. Meg Tilly and Elizabeth Daily make this watchable but it's devoid of tension due to the silliness of the psychic powers. And Adam West isn't featured enough. Like that they used Hollywood Forever cemetery. 6/10

Fired Up (2009) isn't your average cheeseball cheerleading flick. Besides the fact that it's actually pretty good, it's also intentionally meta. Yeah, Bring in On, baby. Good comedy bits throughout some more effective than others. More teen comedies should take note. 6.5/10

Email ThisBlogThis!Share to TwitterShare to FacebookShare to Pinterest
Labels: 1983, 2009

I agree Dark Fire is not a scary movie at least not for me. This movie has weak story line although actors tried to put their best but they can't do much with weak story. It has only few scenes which I like that too in second half. I don't like this movie. I will give 5 out of 10.