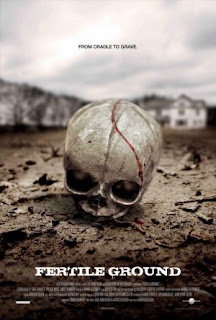 David Morlet's Mutants (2009) is a decent post-apocalyptic zombie flick but other than its story doesn't give us anything new. It's French and the production values are great. 6.7/10

Went out to Barrington AMC to catch a couple of After Dark horror flicks since this was the weekend and this was the only theater in Chicago screening the films. Wish I had a better selection today but ah well. Hit Fertile Ground (2010) first, which is a creepy evil ancestor possession film. Not sure what more can be said with this story. Good acting but not very interesting overall. Really like Gale Harold and think he'd make the perfect Nathan Drake in the Uncharted adaptation (he looks just like him!). 6.5/10

After that took in Husk (2010) even though it's premiering on SyFy next weekend. Love the scarecrows but the obnoxious teens are unbearable. 5.5/10

Came home and watched yet another French film, District 13: Ultimatum (2009). Not a bad sequel but also not quite as good as its predecessor. Decent watch and some fun characters. 6.7/10

Email ThisBlogThis!Share to TwitterShare to FacebookShare to Pinterest
Labels: 2009, 2010

I don't have much to say about this movie as its story doesn't offer anything new to audience.We have already seen the same kind of story in movies.It has some good performance but weak story line cost it.Its not worthy to watch the movie.