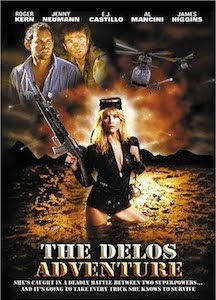 Lost and Delirious (2001) dives right into its young love subject matter from the get-go revealing the secret lives of girls in a boarding school. Didn't even recognize Piper Perabo. Less steaminess and more coming of age. Jessica Paré and Mischa Barton are pretty good here. 7/10

Terror in the Swamp (1985) is a VHS flick I picked up recently and is another awfully executed monster flick with a few inexplicable moments including the finale. The bad dialogue makes it watchable but still not a very good film. 4.5/10

The Delos Adventure (1987) continues my bad movie trend today as a group of scientists uncover a secret government plot and hidden underwater Russian base. Always enjoy seeing Kurtwood Smith in what could've been a pretty good flick if not for the rapid conclusion that sunk the film. 5/10 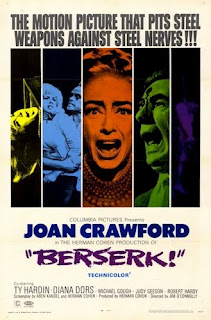 Berserk (1967) is a horror circus flick directed by Jim O'Connolly that could've been one done by William Castle. It features 1) Joan Crawford, 2) has a familiar murderer twist, and 3) the lurid colors and set design (it's a circus!). And for those reasons I really like this film. The circus atmosphere is ideal for staging such an elaborate series of murders. 7/10