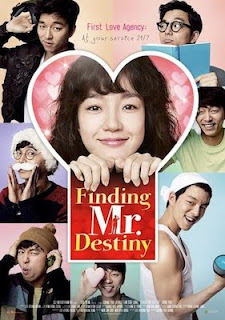 Jang Yu-Jung's directorial debut Finding Mr. Destiny (2011) a.k.a. Kim Jong-Ok Chatgi plays out its looking-for-love in an ugly duck framing quite nicely. Rather surprising considering I wasn't expecting too much. The first hour moves a little slow as all the pieces are put into place but the second hour is really effective. The Burlesque/Star is Born moment is absolutely fantastic. Im Soo-Jung (I Am a Cyborg, Woochi) does a great job carrying the load.

Seo Ji-Woo (Soo-Jung) is the unattached stage manager for a musical production when her father decides to hire a "Finding Your First True Love Company" to help her locate a long lost love she met while visiting India 10 years earlier. The agency is operated by nerdy Han Gi-Joon (Gong Yoo) who assists Ji-Woo in this seemingly impossible adventure. I won't spoil it but you can guess what happens if you've seen familiar romantic comedies placing two opposite personalities together. Despite the formulaic story it's still a good film with some wonderful moments. 7/10

The Vampire's Ghost (1945) I picked off NWI as clued in by @Gholson. And I kinda liked this old school gypsy tale brimming with beautiful women. Essentially a ghost vampire, disguised as an affluent club owner, is on the prowl and must be put down. 6.4

Wow, what can I say about Jim Van Bebber's Deadbeat at Dawn (1988)? This is Van Bebber's ode to old school exploitation with plenty of drugs, violence and blood. I only wish I had seen this sooner. I'm probably gonna buy this one. It's just charged with such explosive energy I still can't get over it. 6.8/10

Email ThisBlogThis!Share to TwitterShare to FacebookShare to Pinterest
Labels: 1945, 1988, 2011

This is an average movie.First half of the movie is slow although in second half it picks the track.Its normal love story.It doesn't have much to offer the audience.

Yeah, it's very formulaic. But it still works for me but could be shorter and maybe more effective.