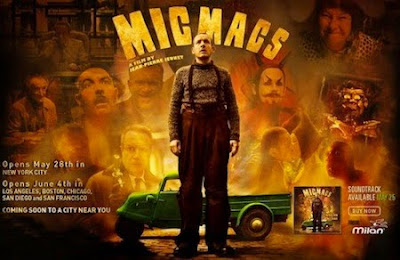 Jean-Pierre Jeunet's Micmacs (2009) contains all those familiar sweet nuances that really make me regret not making the effort to see this on the big screen. Maybe the early mixed reactions or whatever seeped inside my mind because really this is a film that should be seen in the theater. So many delightful touches and characters within a humorous folly on the art of war. Beautiful film. 7.8/10

Email ThisBlogThis!Share to TwitterShare to FacebookShare to Pinterest
Labels: 2009

Micmacs is a comedy movie. I got mixed review about this movie still I decided to watch it.It doesn't have story but some funny sequences which you may like. This is just a time pass movie. I won't recommend this movie to watch.

Really? I think it's an excellent film. Wish I had seen it in the theater.