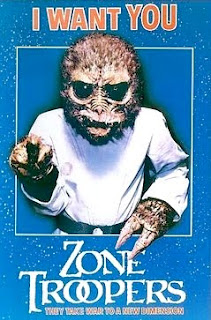 Zone Troopers (1985) is a harmless sci-fi comedy that gives Art LaFleur, Tim Thomerson, and Tim Van Patten a chance to ham it up onscreen. They're soldiers in WWII that discover a Nazi camp with a captured alien. Yes, more Nazi alien conspiracies. Perfectly okay late night pap. The creature design is cute. On NWI. 6/10

The Hot Rock (1972) directed by Peter Yates is not unlike many other heist films but what makes this film special is the cast and the setting. It opens with Robert Redford getting released from prison and pulled back into the game by George Segal. These two guys can easily carry any film of their time but here they're surrounded with a marvelous cast to fill in the gaps. What I love is that the city of New York becomes an additional and necessary character. The overhead helicopter shots are terrific including the still-under-construction World Trade Center. 7/10

The House Where Evil Dwells (1982) is a Japanese ghost story that despite its many flaws is very watchable simply for its location and cast. Let it be known that I can watch Doug McClure in anything. Basically an American family moves into an centuries-old traditional Japanese home where a violent murder and suicide took place. Naturally the ghosts still inhabit the home and eventually possess its new hosts. What I question is the location of the house being in Kyoto yet it appears that Edward Albert goes to Tokyo for some late night partying. Wha? And I still find Susan George annoying. On NWI. 6/10 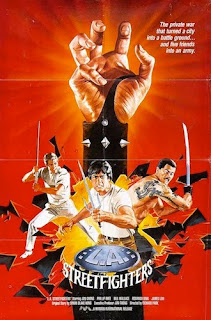 L.A. Streetfighters (1985) a.k.a. Los Angeles Streetfighter is one of the most amazing things I've seen. It defies all explanation. I believe @mattsinger of IFC was the first to bring it my attention. 30 year old high school students battle thugs and gangs in the streets of Los Angeles as all their voices are dubbed in post. Somehow they're able to get steady gigs as security for parties around the city between the gang fighting get hired by a drug dealer. Then, inexplicably, decide to rob him. This brings Bill Wallace and Ken Nagayama into the picture as the heavies to enact revenge. Also love that Phillip "Best of the Best" Rhee is in this. I feel like we need to watch this at "Bad Movie Night" because I don't think I've seen anything quite like this. 6/10 (for pure entertainment & WTF value)

Email ThisBlogThis!Share to TwitterShare to FacebookShare to Pinterest
Labels: 1972, 1982, 1985

Street Rock is a comedy flick. I don't find much in the film. It follows already used comedy tricks which we seen many times. It story is also weak. Actors in the movie tried their best but yet failed to give an entertaining movie. I don't like this movie.