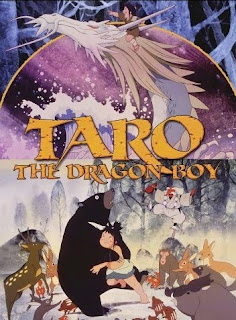 Tatsu no ko Tarô (1979) a.k.a. Taro the Dragon Boy is a cute feature animation adapted from a Miyoko Matsutani novel that delves into Japanese folklore about the quest of one boy looking for his mother. Along the way he uses his special powers to help starving villagers. Very enjoyable watch. Fulfills my goal of viewing one Japanese film this week! 7.4/10

The 400 Blows (1959) is marvelous! Directed by Francois Truffaut, it's easy to become so involved that you forget this is a child actor playing the main role of kid on the run. This is another blindspot film even though that goal has been hit this week. Don't mind because I've been wanting to view this. 7.8/10

Email ThisBlogThis!Share to TwitterShare to FacebookShare to Pinterest
Labels: 1959, 1979