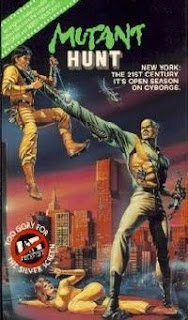 Mutant Hunt (1987) is clearly an exercise in how to make a bad film worse. There is no other explanation this on-screen diarrhea. The mutants aren't even mutants; they're really androids imitating cardboard characters. But with all the bad comes pure moments of hilarity including our lead's cyborg fight in his tighty-whiteys. Hat tip to @Gholson and @JacobSHall for alerting me of this turd on NWI. 4/10

Posted by sleestakk at 9:50 PM

Email ThisBlogThis!Share to TwitterShare to FacebookShare to Pinterest
Labels: 1987

What I can say about this movie. This is the worst movie that I seen this year. This has neither story nor performances. I don't like anything about this movie. don't even think to watch. Its complete waste of time.Turd Hunting is a bad movie.