Be Afraid of Brides 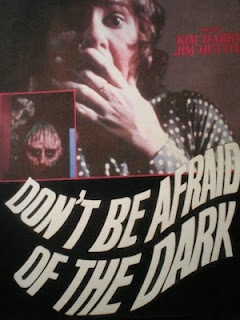 Don't Be Afraid of the Dark (1973) was BK's Horror Movie Night selection today and one I picked up from Warner Archives last year. Directed by John Newland it stars Kim Darby (of the original True Grit) as one half of the couple that moves into an old house inhabited by small troll-like creatures. Kinda amazing this was made for TV because it's so damn creepy. I may have even seen it back in the day but repressed it. 7/10

Late night viewing was relegated to the truly awful Bride Wars (2009) featuring Kate Hudson and Anne Hathaway in a preposterous plot of two soon-to-be-married friends who turn on each other because their weddings were "accidentally" scheduled on the same day. I call bullshit. 4/10

Email ThisBlogThis!Share to TwitterShare to FacebookShare to Pinterest
Labels: 1973, 2009

Don't Be Afraid Of The Dark said...

I expected this movie a good horror movie but movie fails to my expectation. Its story is too slow or better to say it doesn't have any story. This movie completely fails to entertain audiences. Don't watch this movie. Its complete waste of time.

Waste of time? For a TV movie it's actually pretty good. Admittedly it's slow at times but love the payoff.